The Subset Sum (Main72) problem, officially published in SPOJ, is about computing the sum of all integers that can be obtained from the summations over any subset of the given set (of integers). A naïve solution would be to derive all the subsets of the given set, which unfortunately would result in

time complexity, given that

is the number of elements in the set.

This post outlines a more efficient (pseudo-polynomial) solution to this problem using Dynamic Programming and F#. Additionally, we post C# code of the solution.

Note that we have solved a similar problem in Party Schedule (PARTY) with F# blog-post.

This problem provides a set of integers

, and specifies the following constraints–

, where the value of

Given this input, we would like to find all the integers:

is the sum of the items of any subset over

. Afterward, we sum all these integers, and return it as the result to the problem instance.

In essence, we reduce this problem as follows: Given

, can we express it using any subset over

? If yes, we include it in the solution set for summation. Interestingly, we  realize that the stated problem is a special case of a more general problem called Subset Sum, given that the sum is

What would be the maximum possible value for

is not practical at all, as

can be bounded by the following upper limit:

, i.e., the summation of all the items in

. This observation effectively reduces the search space to

and verify whether their sum is within

. Recall that, due to its exponential time complexity, it is quite impractical .

Using dynamic programming technique, a pseudo-polynomial algorithm can be derived, as the problem has an inherent optimal substructure property. That is, a solution of an instance of the problem can be expressed as the solutions of its subproblems, as described next.

as the function that determines whether the summation over any subset

can result in the integer

can be derived over any subset

To define the recurrence, we describe

In Eq. (1), the first case refers to the fact that

can not be included in the subset to derive

into two subproblems as follows: we can either ignore

= true, we can include it in the solution set.

As we can see overlapping subproblems, we realize that we can effectively solve them using a bottom-up dynamic programming approach. What about the base cases?

Using a table– dp, we can implement the stated algorithm as follows.

In essence, the Nth row in the table provides the set of integers that can be derived by summing over any subset

. Thereby, we compute the summation of all these integers that satisfies subsum(N,j) = true, and returns it as the result.

Full source code of the solution can be downloaded from this gist. For C# source code, please visit following gist. Please leave a comment if you have any question/suggestion regarding this post.

and a new problem. See you soon; till then, happy problem-solving!

The Bytelandian Gold Coins problem, officially published in SPOJ, concerns computing the maximum dollars that can be exchanged for a Bytelandian gold coin. In this post, we outline a solution to this problem with memoization and F#.

It can be exchanged to three other coins, i.e.,

coin can be exchanged for

From the above interpretation, it is evident that the maximum achievable dollars,

(from the exchange of coin

) can be computed  as follows.

It effectively demonstrates an optimal substructure and therefore, hints to a dynamic programming (DP) technique to solve it. That is, for a coin

, the optimal value of dollar is given by the following function.

, a bottom-up DP would require a very large array, and performs more computations.  Hence, for the overlapping subproblems, we employ memoization.

The following code snippet outlines the implementation of Memo.

Full source code of the solution can be downloaded from this gist. Please leave a comment if you have any question/suggestion regarding this post.
Happy problem-solving! 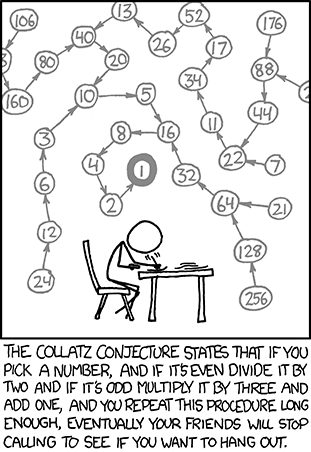 This post focuses on Collatz problem, which is also known as, among others, the 3n+1 problem, and  the Syracuse problem.

Outline. We begin by introducing Collatz conjecture; afterwards, we presents an algorithm to solve the

problem (UVa 100 or SPOJ 4073) published in both UVa and SPOJ. The primary advantage of having it in SPOJ is that we can use F# to derive a simple and elegant solution; at the same time, we can verify it via SPOJ’s online judge.

problem, concerns the iterates generated by the repeated applications of following the function: Given a positive integer,

which implies that if

is even, it returns

. This function is called Collatz function. Consider, for instance,

, the generated iterates are following:

. This sequence is referred to as Collatz sequence, or hailstone numbers.

Collatz conjecture, which is credited to Luther Collatz at the University of Hamburg, asserts that for any positive integer

, the repeated applications of the Collatz function, i.e.,

The generated sequence of iterates:

is called the Collatz-trajectory of

. For instance, beginning from

, the resulted sequence converged to

. Note that, although Collatz problem is based on this simple concept, it is intractably hard. So far, it has been verified for

In the rest of this post, we intend to solve the

problem, which is essentially a restricted or bounded version of the Collatz problem.

Interpretation. It restricts the iteration by exiting as soon as the Collatz sequence reaches to value 1 at

= 26, the resulting Collatz sequence is therefore:

, and length of the sequence is

i.e., 11. This problem asks to compute the largest Collatz sequence that results from any integer between

, which are provided as inputs. Note that, the value of

are both positive integers:

Implementation. We first apply a naïve brute-force algorithm to solve this problem, which computes the length of the sequence for each integer from

, and returns the maximum length found.  It is worth noting that-

= 26, we also compute the sequence for 13 that has already  been computed during

As we shall see next, we have optimized the naïve implementation considering the above observations. First, we define function, nextCollatz, that returns next integer of the Collatz sequence, given an integer

. In effect, it computes

Using the algorithm outlined in collatzSeqLength, the length of the Collatz sequence is computed for any given integer

It includes the following optimizations over the naïve implementation we stated earlier:

Memorization has been incorporated to effectively optimize the algorithm by avoiding redundant computations of the sequence and its length, which in turn provides a faster algorithm than its naïve counterpart, albeit with the cost of additional space.

Continuation-passing-style  has been applied in this algorithm to accommodate, and to combine tail-call optimization with memorization.

Complete source code of this problem can be found in this gist. Following IDEONE page (with sample inputs and outputs) has been provided to further play with the code (in case of the unavailability of F# in local system).  Java source code is also available for this problem.

Try solving Euler Problem 14, which resembles this problem and based on these stated concepts. Please leave a comment if you have any question/suggestion regarding this post. Happy coding!

This problem can be solved using dynamic programming with memoization technique. In essence, it is about computing the Edit Distance, also known as, Levenshtein Distance between two given strings.

Edit Distance—a.k.a “Lavenshtein Distance”–is the minimum number of edit operations required to transform one word into another. The allowable edit operations are letter insertion, letter deletion and letter substitution.

as D, which can be defined using  a recurrence as follows.

are empty strings, denoted as

is the last character of

contains rest of the characters. Same goes for

.  We define edit distance between

using a recurrence and in term of

can be defined as the minimum, or the least expensive one of the following three alternatives stated in the above equation.

As this is a ternary recurrence, it would result in an exponential run-time, which is quite  impractical. However, using the dynamic programming with memoization, this recurrence can be solved using a 2D array. The code to solve this problem is outline below.

As shown in line 14, the distance grid.[h,w] can be computed locally by taking the min of the three alternatives stated in the recurrence (computed in line 11,12, 13). By obtaining the locally optimum solutions, we eventually get the edit distance from  grid.[s.length, t.length].

. Lets denote the lengths of both strings as

. Then, the complexity become

Complete source code is outlined in the next page.

Given that the length of the sides are {a,b,c,d}, the Maximal Quadrilateral Area is given by the following equation:

where semiperimeter s can be defined as follows.